Ajwain (Trachyspermum ammi L. Sprague) is an annual aromatic and herbaceous plant of the family Apiaceae. It is an erect annual herb with a striate stem and originated in the eastern regions of Persia and India. Its fruits are small, and grayish-brown in color.
A spice that every Indian household is all too familiar with and without which every dal tadka is incomplete, ajwain is derived from a herb plant that originated in our very own country. Ajwain seeds vary from being slightly olive green to brown in colour. All parts of this herb have a very strong scent hence it is also known as Ugragandha in Sanskrit. The seeds have a bitter and pungent flavour, somewhat like oregano, and because of its strong aromatic essence, it is often added to curries and pickles .

Be the first to review “AJWAIN” Cancel reply 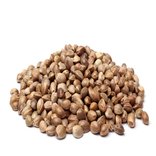